These Chemicals Were Found in Your Favorite Sparkling Water Brands

Before you fully hop on the sparkling water trend, make sure you know what’s actually in the water you’re drinking! 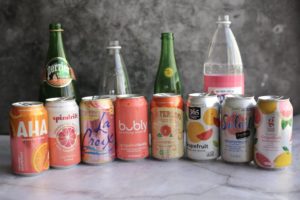 Some of the top, well-known sparkling water brands have recently been exposed by a Consumer Reports study released in September. Brands such as Topo Chico, Bubly, Polar, and La Croix have been found to have, “contained measurable amounts of man-made chemicals called per- and polyfluoroalkyl substances, or PFAS for short.” Back in March of 2020, we released a blog post answering the common questions of “What are PFA’s and How are they harmful?” PFA’s or “forever chemicals” are man-made chemicals that are found most commonly in common household products – such as non-stick pans [Teflon], factories, and our tap water. They’re called the “forever chemical” because they do not break down over time. Instead they continue to build inside both humans and animals as well as the environment – like groundwater.

More importantly, PFA’s have been linked to potential health risks in humans, which is why they have been a cause for concern in recent years. Thyroid issues, developmental problems in children, high cholesterol, immune system disruptions and even certain cancers have been linked to the exposure of PFA’s. As we already know, there are no federal regulations PFA’s, only guidelines from the EPA.

According to Insider, “[the EPA] considers levels above 70 parts per trillion (PPT) to be a health risk. Some states have their own PFAS regulations” In the same article released by Insider, it is mentioned that the Consumer Reports research found that “Topo Chico, owned by Coca Cola, contained the highest levels of PFAS, at 9.76 parts per trillion. Polar, the second-highest, contained 6.41 parts per trillion. Also on the list were Bubly (owned by PepsiCo), Canada Dry, Poland Spring and Perrier (both owned by Nestle), and La Croix, which had levels of PFAS between 1.1 and 2.24 PPT.” Based on this information as well as the information provided by the EPA guidelines, it’s important to note that the levels measured in these products are not dangerous or harmful amounts of PFA’s. 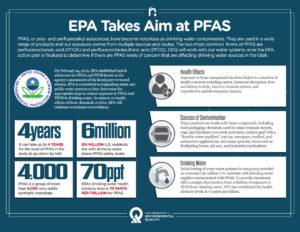 A few of the main brands listed had either mentioned their testing did not detect any PFAs or questioned the Consumer reports’ testing methods overall. In fact this same article stated, “The International Bottled Water Alliance also released a statement alleging that the Consumer Reports study was ‘not based in sound science” and “is misleading and will unnecessarily frighten consumers’” And goes on the say that Coca cola was the only company the admitted to having small levels of PFAs detected but commented further by saying they would, “continue to make improvements to prepare for more stringent standards in the future.”

Since these are within the EPA regulations, there is no reason for you to go home and dump your favorite, newly bought case of La Croix. However it’s important to keep in mind that again, there are no federal regulations for PFA’s in water products. The director of food policy for Consumer Reports, Brian Ronholm stated, “The fact that so many brands had total PFAS below 1 ppt shows it is feasible to get to more protective levels,” making the point of this study was to further highlight the need for federal limits for PFAs in water products.

Make the switch to clean, safe drinking water for your home or workplace sooner rather than later to avoid the build up of PFA’s in your system. At Blue Marble Water Solutions, our ION DS Series offers the best purified sparkling water at the touch of a button! This reverse osmosis sparkling water gives you the same sparkling water you’ve come to love with no sugars or artificial sweeteners added! Make your own favorite sparkling water favorites in your home or office. To learn more about our services and what we can offer you, contact us directly today! 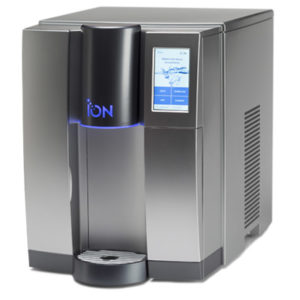