The Water in Our Bottled Water is From Where!

Do you know where your bottled water comes from? One hint: it’s not from the beautiful picturesque scene depicted on the bottles themselves.

In an article recently published by VOX, Poland Springs’ lawsuits against them are primarily based on false advertising. Not knowing where your water REALLY comes from when you’re drinking out of bottled water seems to be a common trend in the bottled water industry. According to Peter Gleick, a scientist and president emeritus of the Pacific Institute, who spoke to the Washington Post about the lawsuit against Poland Springs, “Most of Nestle’s waters are pumped from the ground, but the bigger issue that the regulatory definition of what really counts as spring water is really weak. No one is really looking over the shoulders of the bottled water companies.” 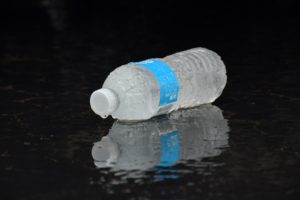 On multiple occasions, Nestle has faced serious accusations of false advertising. In fact, in that same Washington Post article, they mention that back in 2003, Nestle, “agreed to pay $10 million to charity to settle a similar class-action lawsuit that alleged it falsely advertised Poland Spring water.”

Poland Springs says they don’t take water from the original Poland Spring any longer, but instead, they identify eight new “springs” where they get their “natural spring water from”. However, according to the most recent lawsuit, the VOX article talks about, they accuse Poland Springs creating “phony, man-made ‘springs’” to keep its backstory going,

“‘There is no photographic proof that even one such spring — much less eight — exists on or near Defendant’s sites in Maine,” the suit says. “Nor is there any historical evidence for six of Defendant’s alleged springs, and two are former springs that no longer exist. … By faking the existence of springs, Defendant is defrauding its consumers.’ Instead, the lawsuit says the company collects water from areas in Maine like Hollis and Fryeburg, which it claims are near a ‘former human waste dump, refuse pit, landfill, ash pile, salt mound, farm where pesticides were previously used, fish hatchery or toxic petroleum dump site’”.

Buying into the bottled water’s “spring water” scam is a risky business because of the definition behind what ‘spring water’ actually means can be skewed to fit their standards. To read more about the lawsuits and the other articles mentioned visit the VOX article.

At Blue Marble Water Solutions, we aim to provide all of our customers with the best tasting, pure water. Make the switch from toxic and deceitful bottled water companies to honest and clean Blue Marble Water! Contact us today to get started and learn more.